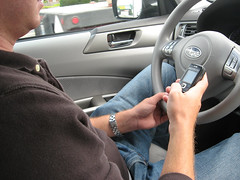 A new Massachusetts law went into effect on September 30, forbidding texting while driving for all drivers, and both texting and cell phone use for drivers under 18. As a Massachusetts OUI defense attorney, I’ve noticed that some news reports have called the penalties for texting “harsh.” This is interesting, since the penalties for texting are nowhere near as harsh as they are for drunk driving, even though studies have shown that texting while driving is actually more dangerous than drunk driving.

Lawrence Police Chief John Romero told the Merrimack Valley Eagle-Tribune that the texting law is “long overdue,” since texting has been the cause of many “tragedies.” The law punishes texting offenses with fines of up to $500 and up to a one-year loss of license. Romero notes, however, that it will be difficult to enforce the law because police can’t be certain what drivers are actually doing with their phones behind the wheel. Dialing while driving is still legal for drivers over 18. If police pull over a driver who appears to be texting, drivers can simply say they were just dialing a phone number. Without a warrant, police may not be able to check the drivers’ phones to find out whether they’re telling the truth.

What’s most striking to me, as a Massachusetts drunk driving defense attorney, is the gap between how the law perceives the dangers of texting compared to that of drunk driving. Britain’s Transport Research Laboratory found that texting drivers’ reaction times were 35 percent worse than when they weren’t texting, while the reaction times of drivers who were at the legal limit for alcohol consumption only deteriorated by 12 percent. Even drivers who had used marijuana performed better than texters, with a 21 percent slower reaction time. Texters were also 91 percent more likely than non-texters to veer out of their lanes, and were less able to keep a safe following distance from the vehicle ahead of them. Yet when a texting driver causes a fatal crash, Utah is the only state that subjects that driver to the same penalties a drunk driver would pay, with up to 15 years in prison.

In Massachusetts, a first offense for texting by drivers over 18 is punishable by a $100 fine. Drivers under 18 pay the fine, lose their license for 60 days, and complete a court-assigned driver attitude course. In contrast, the penalty for a first offense OUI is much steeper: It may include a jail sentence of up to 2 and a half years, a fine ranging from $500 to $5,000, hundreds of dollars in fees, and a license suspension of one year. The alternative “24D” disposition for a first-offense OUI is much harsher than that for texting too. A 24D judgment involves probation for up to two years; completion of an alcohol education program; a 45-day loss of license; and hundreds of dollars in fees.

There are lots of possible reasons for this disparity in penalties. Perhaps not as many people have lost loved ones to texting drivers as to drunk drivers, so the political will to do something about the problem has not developed. But even though the scientific evidence makes clear that texting is at least as much of a menace on the roads as drinking and driving, people charged with OUI face much more serious potential consequences than texters do. That’s why it’s so important for anyone charged with OUI to work with an experienced and knowledgeable Massachusetts intoxicated driving defense lawyer to help them navigate the system and get the best outcome — a dismissal of charges or a not-guilty verdict.

If you have been charged with OUI in Boston or eastern Massachusetts, please contact attorney Stephen Neyman as soon as possible to help protect your rights and your freedom. You can set up a free consultation at (617) 263-6800 or contact us online.