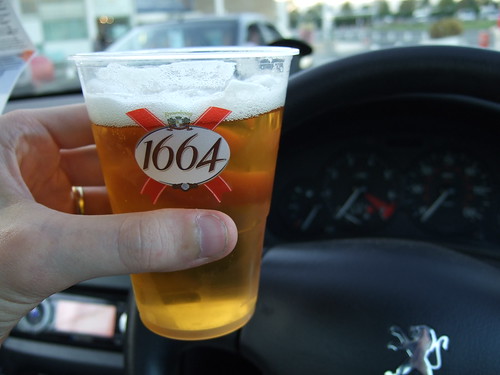 A man from Charlton was sent to prison Feb. 24 after receiving his seventh conviction for operating under the influence. Jason Wetteland, 40, was arrested most recently on Aug. 1, 2009, after an Amesbury police officer witnessed him nearly causing a crash on Route 110. The officer immediately pulled him over, and Wetteland allegedly admitted he was drunk. He was holding a bottle of blackberry brandy between his legs and had at least eight cans out of a 12-pack of beer in the vehicle. Nonetheless, Wetteland refused to take a blood-alcohol concentration test. He pleaded guilty to a fifth or subsequent OUI; driving after license suspension, subsequent offense; and negligent driving.

For the OUI conviction, Wetteland was sentenced to up to five years in prison and eight years of probation, plus fines. He also lost his license to drive and was sentenced to time served for driving with a suspended license. As conditions of his probation, he will be required to attend alcohol classes; stay away from drugs and alcohol; submit to random tests; and will not be allowed to drive. His prior convictions for operating under the influence took place in 1988, 1990, 1991, 1991 again, 1999 and 2001, in Dudley, Worcester and East Brookfield courts.

Drivers like this do not represent the bulk of my clients as a Massachusetts OUI criminal defense attorney. Studies show that the majority of first-time drunk driving defendants do not commit another drunk driving offense — they learn from their mistake and move on. However, a minority are chronic drunk drivers, who may have a problem with alcohol that can’t be solved by a 12-month license suspension. The harsh penalties they face are not aimed at first-time drunk drivers, but a look at those penalties shows how important it is to defend yourself from a first OUI, so that subsequent-offense penalties are not available to prosecutors.

A first offender in Massachusetts is likely to get probation rather than jail time (although jail time is an option), fines and fees and a license suspension of one year, with a hardship license available after three months. Alternative disposition (the 24D program) is also available for first offenders, which allows them lower fines, a shorter license suspension and no possibility of jail. These penalties get harsher with each subsequent offense. A fifth or subsequent offense like Wetteland’s carries mandatory prison time of at least two years, and up to five; steep fees; and the lifetime loss of a driver’s license. This is why people charged with a first OUI should, whenever possible, get help from an experienced Massachusetts drunk driving defense lawyer — so they can keep that first OUI off their records. In the best cases, this allows them to learn from their mistakes without the need for life-altering penalties.

If you’re charged with drunk driving in Massachusetts, the Law Offices of Stephen Neyman can help. Based in downtown Boston, we represent people in OUI-related matters throughout the state of Massachusetts. To learn more at a consultation, please call our office at (617) 263-6800 or contact us through the Internet.