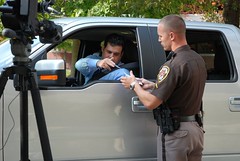 Prospective employers, dates, coworkers and friends can find information about most of us online. Unfortunately, that can include news reports about our misdeeds and mistakes. A number of candidates who ran for office this year have learned this the hard way, from Delaware Senate candidate Christine O’Donnell’s claims to have been involved with witchcraft to Massachusetts Republican Jon Golnik’s OUI arrest in 2001. As a Massachusetts OUI defense lawyer, I think it’s important for everyone to realize that any admissions they make if they ever face a drunk driving charge can follow them for a long time. That’s why it’s important to know your rights, including what you are and are not required to say or do when you interact with the police.

Jon Golnik was arrested for OUI drugs and alcohol in 2001, and he continued to have to answer questions about it nearly a decade later, since he ran for the Massachusetts Fifth Congressional District seat in the U.S. House of Representatives. Golnik, now 45, had attended an AC/DC concert at the FleetCenter in Boston, and police found him shirtless and slurring his speech. The police report from this incident says Golnik told the police he had four beers, and admitted that this impeded his ability to drive safely. He was also driving on a flat tire. He has denied smoking marijuana, which he was charged with, but he admitted to having drunk alcohol before driving. While the marijuana charge was dismissed, his license was suspended.

As I’ve written here before, if the police pull you over on suspicion of drunk driving, they already think you’re guilty. During the traffic stop, they are looking for evidence to include in the police report, which can be used against you at trial. That’s why it’s important to politely refuse to answer police officers’ questions about whether you have been drinking — and never, ever volunteer that kind of information. Instead, consider saying that you need to speak to your attorney, and then actually speak to an attorney as soon as you can. If you can keep incriminating statements like the one Golnik made out of the police report and out of public record, your attorney stands a much better chance of helping you get the charges dismissed or a not-guilty verdict.

As a Massachusetts drunk driving defense attorney, I can tell you that avoiding an OUI conviction is important for a lot of reasons. Obviously, you don’t have to worry about jail time or the steep fines and fees that go with a conviction, but you also don’t have to worry about your auto insurance rates skyrocketing or having to disclose a conviction on job applications. Unfortunately, since most police reports are public records, information about an OUI arrest could still become public even if the charges are dismissed or if you’re found not guilty. But if you have avoided incriminating yourself by admitting to drinking and driving, you can much more persuasively explain your drunk driving arrest to anyone who asks as a simple mistake by the police.

A knowledgeable, assertive Massachusetts intoxicated driving criminal defense lawyer can help make sure that you don’t have to spend the rest of your life defending one poorly considered statement to the police. For help defending yourself against drunk driving charges in Boston and eastern Massachusetts, please call the Law Offices of Stephen Neyman, located in downtown Boston, at (617) 263-6800. You can also send us a message online.