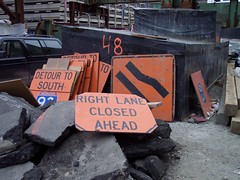 Those of us who followed the progress of the Big Dig remember well the name Matthew Amorello, the former chair of the Massachusetts Turnpike Authority who oversaw the massive construction project for four years. Amorello resigned from that post after a woman was killed when part of the roof of the Ted Williams Tunnel collapsed on her car. Now, Amorello faces charges for OUI and leaving the scene of an accident with property damage. Many Massachusetts residents don’t think fondly of Amorello, since he’s been associated in the public mind with the sky-high cost overruns, scandal, and tragedy of the Big Dig. But as a Massachusetts drunk driving defense attorney, I think it’s important to point out that like anyone else facing charges, Amorello is innocent until proven guilty, and he’s entitled to defend himself against the charges just like anyone else.

Amorello, 52, of Wenham, was arrested after allegedly hitting a 1999 Saab and a 2005 Dodge Magnum with his 1999 Ford Explorer. Haverhill police found Amorello in his Explorer, minus one wheel, in the parking lot of a Mercedes dealership. A Haverhill police officer said, “He was really out of it, and he didn’t know where he was.” Additional details about the arrest, like how the police determined that Amorello was intoxicated, were not available. Leanor Santos saw Amorello’s car hit hers. “All you could see was flames from the car as he was driving away,” she said. Amorello posted $40 bail and was scheduled to be arraigned at Haverhill District Court on August 9. However, he missed the court date because he was hospitalized at UMass Memorial Medical Center, his attorney told the judge. The article did not say why Amorello was hospitalized, but the attorney noted that Amorello was apparently unconscious when arrested.

It’s always a challenge for people charged with OUI to ensure that their rights are respected as they go through the legal process. It can be even more challenging for public figures who are associated with controversial issues unrelated to their OUI charges. As the Boston Herald reported, not only was Amorello in charge of the Mass Turnpike Authority during the fatal tunnel collapse, but prior to his resignation, he changed his department’s policy on sick leave so that when he left, he could receive $75,000 as compensation for his accrued but unused sick time. For that, he was fined $2,000 by the state ethics department. There’s no question that this raises serious ethical questions, but it’s important for the law to deal with Amorello’s alleged drunk driving and leaving the scene charges on their own, not in the context of unrelated accusations against him.

In my experience as a Massachusetts OUI criminal defense lawyer, people in Amorello’s position fare best when they work with a well-trained attorney who can ensure that their public image is kept separate from the charges that they actually face. There has already been some particularly nasty commentary about Amorello in the press, and his family has said that public criticism stemming from the Big Dig controversies has led to his personal struggles. Under these circumstances, it would not be a surprise if Amorello is feeling even more upset and unsettled than another person charged with OUI would be. That’s exactly why it’s best to hire a Massachusetts intoxicated driving defense attorney who can handle the case carefully. This can mean making sure that the arresting officer followed the law to the letter, that all the defendant’s rights are preserved, and that the outcome of the defense is as favorable as possible — either a dismissal of charges or a not guilty verdict.

Attorney Stephen Neyman provides a strong voice in defense of people charged with driving while intoxicated. If you have been charged with OUI in Boston or anywhere in eastern Massachusetts, please contact the Law Offices of Stephen Neyman right away for a free consultation. You can call us at (617) 263-6800 or contact us online.