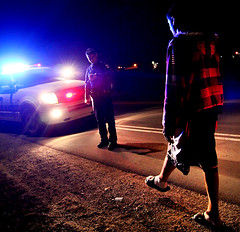 END_OF_DOCUMENT_TOKEN_TO_BE_REPLACED

A 26-year-old Groveland, Massachusetts man was arrested on multiple charges after leading police agencies on a car chase in northeastern Massachusetts, the Georgetown Record reported Sept. 22. Scott Berube already had two outstanding warrants for operating under the influence of liquor, which the newspaper said were second and third offenses. Earlier on the day of the chase, he was also allegedly involved in a hit-and-run accident. Around 10 p.m., a police officer spotted Berube at a Haverhill, Massachusetts gas station, gave chase and called for backup.

Once backup arrived, the officers tried to stop Berube by positioning their vehicles on either side of his. However, Berube drove directly at both officers, forcing them to jump out of the way. All in all, he drove through at least four towns before Georgetown, Massachusetts police were able to stop his vehicle with a device that punctured his tires. Berube fled on foot, leaving a passenger behind, but was caught with the help of a helicopter and K-9 unit. Police found several controlled substances in the crashed vehicle, including marijuana, Xanax, Percocet and acetaminophen with codeine. Both Berube and his passenger were charged with possession of those substances, with intent to distribute the marijuana and Xanax. Berube was also charged with DUI drugs, failure to stop for police, driving without a license and assaulting a police officer, among other charges, and the two outstanding warrants.

Second and third OUI charges may sound scary, but a smart, experienced Massachusetts DUI defense lawyer can find multiple avenues of defense, depending on the circumstances of the case. For example, a charge of OUI drugs may be dropped if the defendant can show that he was not actually impaired, regardless of whether he took any drugs. But because Berube did not handle the earlier charges against him, he ended up fleeing the police and receiving a significant number of new charges. Now he will almost certainly need a good Massachusetts intoxicated driving lawyer to help sort through this tangle of charges and minimize the damage to his life and his family.

END_OF_DOCUMENT_TOKEN_TO_BE_REPLACED

Last week Robert Meserve was held without bail after being charged with his fourth OUI offense and leaving the scene of an accident. The case is being prosecuted in the Taunton District Court. According to reports, last Tuesday around 11:00 p.m. police responded to a report of a car chase near the Taunton Green rotary. A 911 caller reported being in his car when it was struck by another car that took off. The caller followed the subject and updated police with his location. The suspect, Meserve was stopped. Officers detected an odor of alcohol on his breath, glassy and bloodshot eyes and unsteadiness on his feet. Meserve was given field sobriety tests which he failed. He refused the breathalyzer test.

Fourth offense OUI cases in Massachusetts have severe consequences. In addition to steep court costs, fines and fees there is a mandatory one year jail sentence that you must serve. Fourth offense DUI cases are felonies in Massachusetts. There is a potential five year state prison sentence associated with this charge. Meserve’s biggest problem stems from leaving the scene. This is one of those exacerbating factors that can lead to a judge imposing a sentence higher than the minimum mandatory. This action might also result in the district attorney prosecuting this case in the Superior Court. Had Meserve stayed and exchanged insurance information with the person he hit the police might not have been called and these charges might not have issued.

END_OF_DOCUMENT_TOKEN_TO_BE_REPLACED

A Salem, Massachusetts man was driving the wrong way down a one way street. That in and of itself should be enough to get anyone’s attention. However, the defendant, Natalio Rodrigues drew a little more attention to himself by honking his horn at a car coming right at him. Unfortunately for Rodrigues, the car he was beeping at was occupied by two Salem police officers. Reports indicate that Rodrigues drove directly at the officers without endeavoring to stop or pull over. The officers eventually were able to stop the suspect. Upon doing so they smelled alcohol. Rodrigues failed the field sobriety tests and refused to take a breathalyzer test. He stands charged with fourth offense OUI, driving negligently to endanger and driving down a one-way posted street.

Rodrigues is in trouble. Fourth offense OUI convictions in Massachusetts carry a minimum mandatory one year house of correction sentence. There is also a ten year loss of license. There is also a maximum five year state prison sentence that can be imposed meaning that this is a felony. Many district attorneys in Massachusetts indict fourth offense DUI cases particularly where the facts are disconcerting. I would not be surprised to see Rodrigues case get indicted and prosecuted in the Essex County Superior Court.

From the outside looking in this case looks difficult to defend. The events took place at 12:30 a.m. Driving the wrong way down a one way street with police officers as eyewitnesses suggests a problem from the outset. Failed field sobriety tests and the odor of alcohol complicate matters more. There is typically little sympathy felt by judges when sentencing fourth time offenders, particularly in circumstances such as these. Unless he goes to trial and wins, Rodrigues will be serving some jail time.

END_OF_DOCUMENT_TOKEN_TO_BE_REPLACED

Last week Robert Fulton, a Rockland, Massachusetts resident was followed by a driver who saw him cross over the center line several times. The driver called 911 on his cell phone and followed the car until an officer located the vehicle and pulled it over. Fulton was arrested and charged with OUI. According to reports this is his fourth offense. Fulton was arraigned in the Plymouth District Court where the case will be prosecuted. His prior drunk driving convictions were in 1997, 1992 adn 1984. There is no indication as to whether or not field sobriety tests were taken nor was there any mention of a breathalyzer.

Here is what Massachusetts law says about fourth offense drunk driving convictions. First, there is a potential for five years in state prison. Second, fourth offense DUI’s are felonies in Massachusetts. Third, there is a mandatory minimum one year house of correction. Fourth, there is also a ten year loss of license. Fifth you can petition for a hardship license after five years. Sixth, there are statutory fines and fees that you must pay if you are convicted of this crime.

These days people routinely use their cell phones to call in suspicious activity. A large number of Massachusetts OUI prosecutions were initiated as a result of people calling the police with their observations of erratic driving. Sometimes people call in to report that they actually saw someone drinking while driving.

Many people wrongly believe that old or stale drunk driving convictions in Massachusetts cannot be used as priors. That belief is patently incorrect. Massachusetts has a “lifetime look back” provision in its OUI laws. This means that no matter how old one of your prior convictions is it will be counted if you are again charged with drunk driving.

END_OF_DOCUMENT_TOKEN_TO_BE_REPLACED

Malden, Massachusetts resident Bernard Shidlow pleaded guilty to several offenses last week one of which was his fourth OUI charge. The alcohol related charges were operating under the influence, fourth offense, operating a motor vehicle with a license that was suspended for DUI, leaving the scene after an accident with property damage and negligent operation of a motor vehicle. He was sentenced to three years in state prison for the fourth offense drunk driving and to one year in state prison to be served from and after on the operating on a suspended license for drunk driving.

It was reported that Shidlow was driving 70 mph in a 50 mph zone. A state trooper pursued Shidlow after which the defendant got into an accident with another car. He then tried to avoid apprehension but was caught after driving to the end of a one way street. Police discovered that his license had been suspended for another DUI.

This case was prosecuted in the Essex County Superior Court. While not all fourth offense DUI cases are indicted it is easy to see why the district attorney made the decision in this case. The prosecution undoubtedly believed that Shidlow needed to spend time in state prison. The crime of OUI with a license suspended for another OUI is a part of Melanie’s Law. This crime carries a one year mandatory jail sentence. The fourth offense OUI carries another mandatory one year jail sentence. Apparently the judge in this case believed that a one or two year house of correction sentence was warranted. You can bet that the accident and the defendant’s flight from the scene impacted this decision.